#Left-Out: Not the football of Politics!
It is May Day and what a travesty.That day which symbolises everything about empowerment of the labour, justice, fair play, egalitarianism and power to the people is no longer celebrated.Much less remembered.In another extraordinary way the call – ” May Day! Mayday! May Day!” is an internationally acknowledged call of distress.Is it frightful coincidence or serendipity that such a call for help is being heard for some time now from the fore and aft of the sinking ship: the Left?

The Left would need to explain at the grass roots what it is to be seeking its own individual identity, a collaboration with the far left and the broader spectrum of the unity of pro-secular forces.It would need to examine the globalised surge towards individualism and self-aggrandisement and the disenchantment of the millennials: the young who grew to adulthood without a sense of history and pride of the nation’s true strengths of diversity and pluralism and near-obsessive preoccupation with poverty.The people would like to know how and why the world is swinging to an anti-people philosophy and programme of action and the sudden honeymoon to play surrogates to the vile designs of world domination of the USA.

The downslide had started since Independence.Only the termites of compromise were too small or invisible.The legacies of anti-colonial movements and the overarching presence of the Soviet Union and the rise of China had kept the Left lulled and seduced in a sense of false well-being.Until the deluge…

The people would like to see the Left to once again be on the streets among them and from whose seeds this radical idea of political, social and economic transformation was born.The people want to be led and also to lead.Leadership, organisation, participation, party, flag and a philosophy of action is the crying need.

Bengal stands in the crosshairs of all such questions and much more.Chauvinistically, perhaps pride in that very parochial saying”what Bengal thinks today, India thinks tomorrow.” might still leave them inspired, to say the least!

Setbacks, retreats or defeats can only be temporary.Do they have it in them to arrest the decline, overturn the debacle to rise in defiance and usher in hope for the victory of the people?

Sitaram Yechury with great political acumen and sagacity talks honestly about what went or is going wrong with the Left movement and CPI(M) in particular.For all patriots irrespective of where you stand in the final analysis: an insightful and must read…

END_OF_DOCUMENT_TOKEN_TO_BE_REPLACED

Since India became independent its uneven development and fractured growth, huge differences between the rich and poor or the majority and minority communities, the disenfranchisement of the tribal and the Dalits, among other things, have raised ugly questions afresh on the basic concept of freedom, egalitarianism, justice and sovereignty. State power has been frequently misused to repress the various voices of dissent, agitations and resistance struggles, who have strongly challenged the meaningless of it all. People’s Movements like Tebhaga, Telangana, the Naxalism, Free Kashmir and the demand of Naga liberation have left many thousands dead, even more, embittered. It is today in the crosshairs of what is true martyrdom. In Free India are they to be called, known, reviled or celebrated as terrorists or Freedom Fighters, secessionists or liberators? Is violence against organised state power unconstitutional and only non-violent resistance legit? Is defending and fighting for your legitimate rights fundamental? Will dying in such actions honour them to be called martyrs?

Behind the risk of life and limb stood the woman by his man. Running from sick quarters to banks and schools, buying groceries riding cycles or by walk, receiving and seeing off loved relatives all by themselves, while her loved man was away is a quality taken for granted and an unwritten part of the wife’s job description. Cooking late meals without notice with nothing in store for an unannounced number of gatecrashers, the free-flowing rum and groggy men being the proverbial last straw. Do not get it wrong here! These were still early days for the women to enjoy much less taste the tabooed liquor. It took a while before the docile and submissive Nari came into her own. In her Sunday best, she soldiered on with a smile. Tears there must have been and many at that but these were to be borne and shared by each husband in the dark corners of the bedroom. 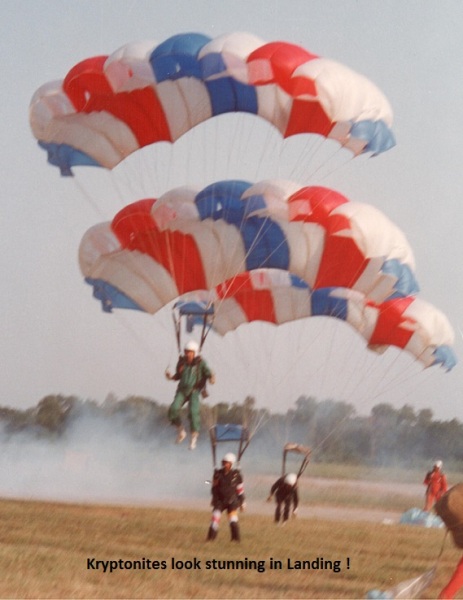 Akashganga never had it so good. Enthused and awed by the sense of spectacle, for the first time in the history of the Air Force, a full load of 37 skydivers in spanking new and fancy dungarees jumped to join an assembled parade contingent on ground consisting of nine Squadrons of three flights each of about a thousand Vayuputras, in 1989. They then joined the ceremonial march past in the august presence of Mini Bawa, the Mukhya Deva Adhikari of the Central Command. Banjo was commended by the Chief of Air Staff for this unique planning and exhibition of military freefalling skills imbued with the spirit and festivity of sports skydiving. Sunil tells us more about the thrill and threats of Akashganga, in the weekly column, exclusively for Different Truths.

Source: Akashganga: Daffodils in the Sky and Butterflies in the Belly – XIV

Members of Akashganga moved on to multi-tasking and become a lean mean fighting machine. Sport and military parachuting complemented each other. for more

On having reached a destination or goal is not to be at the finish line.The struggle begins only then and afterwards.To nurture,develop and sustain the new born. Akashganga the Indian Air Force Skydiving Team was poised to undergo that much known journey.For more read on…

Source: Akashganga: The Old Maketh way for the New- XII

The An-32 got airborne with 37 Dhartiputras on board for the inaugural jump of Akashganga. Chugh was the Devaputra, who did the honours in getting this

Gomes worked silently to convert into reality the ambitions and aspirations of the illustrious predecessors – to make an Air force Skydiving Display Team. The

Source: Akashganga: A new Star in the Galaxy – X

Into the melting pot of trial and tribulations at ADR&DE the baby-faced but stylish, dexterous and skillful Ajoo, our very own whiz kid brought his medicine

When progressive ideas are in retreat and the neo-liberals are in triumphant march Fidel shall mostly be talked, written and remembered as a pig headed dictator.This article would go a long way to correct that mistaken thought.Contrarily,Fidel would appear to be remarkably prescient,honest, humble yet firm.In this excerpt from a rare 1965 interview, Fidel Castro elaborates on his philosophy of the arts.

In Search Of Evanescence

Take a healthy dose of G.K. Chesterton once each week

Straight from the heart

Reigniting the spirit of a nation grown cold.

Picking pebbles along the road much travelled.

The world through my lens

Rezavi’s Blast From The Past

blogging from a marxist economist

All experiences mentioned have been tried and tested by me!

A Pomme a day keeps the Doctor away

History and Hardware of Warfare

Derrida: The Father of Deconstruction

As i have understood Him